As one of Merseyside’s biggest NHS employers, the hospital hosted health and social care professionals, voluntary organisations and other public sector bodies from across Cheshire and Merseyside to raise awareness and learn lessons for the future.

The conference is believed to be the first of its kind in the NHS to focus on transgender, intersex and non-binary communities. It followed changes to the law, new national research and public feedback, which highlighted the importance of meeting the needs of all patients, regardless of their gender identity.

Sharon Landrum, Diversity and Inclusion Adviser for Wirral University Teaching Hospital explained: “We are proud to have a strong LGBT+ network and through this, have become increasingly aware that the needs of transgender, intersex and non-binary communities are not always met. Often, this comes down to a simple lack of understanding so we want to learn from people who have experienced barriers or misconceptions.

“It’s about normalising conversations, getting the basics right and coming together to provide the best possible experiences for everyone who uses our services. The conference has provided information and support mechanisms that we can all link into so I’d like to say a huge thank you to our inspiring speakers for sharing their stories and expertise.”

Speakers at the conference included Anthony Griffin; a leading author, consultant and campaigner for gender diversity, intersex and non-binary rights. Anthony was able to share in-depth knowledge and experience, having won numerous awards for innovative practice and challenging discrimination.

He said: “This is the first bespoke conference I’m aware of that the NHS has held looking at transgender, intersex and non-binary. It’s the first step in ensuring that NHS staff have a real personal understanding of what it means to be transgender, intersex or non-binary and the challenges people face. Events such as this ensure that the NHS is fostering good relations with the community. The staff who came along were incredibly engaged and that’s a credit to the Trust.”

Stephanie added: “For me, as a patient, the conference marked an important step in the Trust understanding the needs of transgender, intersex and non-binary people. It showed their determination to be at the forefront of supporting a vulnerable part of the local community.”

The conference followed the recent announcement that Wirral University Teaching Hospital had achieved the Navajo Merseyside and Cheshire LGBT Chartermark in recognition of its good practice, commitment and knowledge of the LGBT+ community. 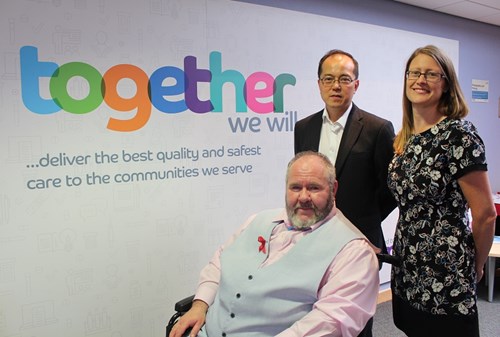 Non-Binary is an umbrella term for people whose gender identity doesn’t sit comfortably with ‘man’ or ‘woman’. Non-binary identities are varied and can include people who identify with some aspects of binary identities, while others reject them entirely.

Transgender Man: A term used to describe someone who is assigned female at birth but identifies and lives as a man. This may be shortened to trans man, or FTM, an abbreviation for female-to-male.

Transgender Woman: A term used to describe someone who is assigned male at birth but identifies and lives as a woman. This may be shortened to trans woman, or MTF, an abbreviation for male-to-female.